It’s 12:48 am and I can’t sleep. I listen to “Heaven” by Beyonce and relive some of the most pivotal moments in my life: the death of loved ones, the life of new ones, the tears I’ve cried, the laughs I’ve laughed, the smiles I’ve smiled, the love I’ve given, the love I’ve received. Life is nothing without love.

“Heaven couldn’t wait for you, so go on, go home” may be the most heartbreaking lyrics we have ever heard Beyonce sing.

“Heaven” floods our ears with a haunting piano melody and heartbreakingly beautiful lyrics that flow as effortlessly as a prayer. Beyonce proves that the power of love is just that…power.

“I fought for you the hardest, it made me the strongest” the song is obviously referring to the miscarriage Beyonce suffered a few years back. The steady piano and quiet enchanting background vocals make the song a symbol of raw emotion.

“Heaven” ends with a Spanish translation of the “Our Father” that further proves the impact of a simple song about the pure feeling of a love that was  lost.

In light of the recent news concerning Chris Martin and Gwyneth Paltrow splitting after 10 years of marriage, I have been reminiscing on some of my favorite Coldplay songs. I have been a huge fan of this band for a very long time. I think what first caught my eye was an iPod commercial that featured “Viva la Vida” incessantly for months and months. After that point I dug deeper into their archives and realized I already knew so many of their songs and just fell completely in love.

“In My Place” (A Rush of Blood to the Head, 2002): There is something about this song that never gets old. The drums, the gorgeous guitar melody, and most of all Chris’ vocals which practically sing the song like he wrote it in 2 seconds and then was like “Yeah, I can sing this right now” The lyrics are alluring, heartbreaking, and relatable all at the same time.

“The Scientist” (A Rush of Blood to the Head, 2002): I have a very personal connection to this song which is why I think I love it so much. I played it on piano and sang it for a couple talent shows. After practicing it for so long I felt insanely connected to the lyrics and could not help but cherish every chord, note, and emotion in this song. To this day, it is one of the most emotional songs I have ever heard. Near the end when the guitar is added into the simultaneous pounding chords you can feel these notes pulsing through your veins (or maybe its Martin’s flawless falsetto?)

“Death and All His Friends” (Viva la Vida, 2008): I have said from the beginning the most insane talent of Coldplay is to transform a song so that when the listener is done, they feel they have just been on a long journey through a personal story. Time and time again I find myself saying “Wait, is this the same song that we were listening to 30 seconds ago?!” Their transitions musically and lyrically are done so beautifully you would believe they were sculpted for years. “Death and All His Friends” starts out as this gorgeous piano driven ballad and then the guitar soars in, both become stronger, then the drums bring everything together and the alternative vibes are zooming through the rest of the song (best part is 2:18…) It soon becomes a huge anthem singing “No I don’t wanna battle from beginning to end, I don’t want a cycle of recycle revenge, I don’t wanna follow death and all of his friends” But wait, it’s not over yet. The band then gets electronic-y as Martin’s vocals lead us into another dream-like sequence that does eventually end.

“Glass of Water” (Viva la Vida, 2008): This song holds one of the coolest messages I have ever heard. A man wonders if he will see heaven inside his glass of water, because he heard you can see your future inside it. The chorus of this song is crazy heavy and pulls you in instantly. I love it in its entirety.

“Sparks” (Parachutes, 2000): This song is a true hidden gem. A steady coffee shop beat and sleepy vocals lead you into a romantic trance through lyrics like “My heart is yours, It’s you that I hold on to, that’s what I do…” I love listening to this song before bed, it could put the meanest gorilla to sleep.

“See You Soon” (The Blue Room – EP, 1999): Much like “Sparks” this is a beautifully composed track almost portraying a goodbye letter to a loved one. The lyrics in this song convey a chilling yet enchanting message, “In a bullet-proof vest, with the windows all closed, I’ll be doing my best, I’ll see you soon…” Start to finish, this song is a work of pure art.

“Don’t Let It Break Your Heart” (Mylo Xyloto, 2011): This song is crazy perfect. It’s an upbeat anthem talking about life’s struggles and how it is never worth it to let anything or anyone break you down. Much like the rest of the “Mylo Xyloto” album we get a colorful array of instruments/melodies and soaring alt-guitars as usual.

If you haven’t heard of some of these songs, GET ON IT! Coldplay’s talent is immense and unforgettable.

I thought my first legitimate post should be about the band who sparked my initial interest/obsession with music: Paramore.

They have come a long way since the greasy hair, band t-shirt, and Vans wearing days. Paramore completely changed the rock genre to me. They started out as a cute young band with a front woman who changed the vision of a “girl singer”. Hayley Williams became an icon. Never have I ever seen a woman rock harder than Ms. Williams herself. She has the perfect amount of talent, poise, beauty, and bad-ass-ness!

Seeing this band perform live four times have been the highlights of my life. The energy and vibe this band gives off is nothing short of positive. Jeremy (bassist), Taylor (guitarist), and Hayley (lead vocals) all have a huge enjoyable chemistry you cannot help but strain your neck to look for. Every show was different, every set was spectacular, and Hayley’s voice remains the same; perfect. Rock music to me was never just about the voice, it was about the music as a whole. Paramore brought that sense of rock music back but with a woman who’s voice could rock a volcano to bits or sing a baby to sleep.

The growth of Paramore from their first album “All We Know Is Falling” to their latest album, the self titled “Paramore”, is immense. The content is heavily weighed on new life experiences. We also get to hear the most spectacular mixes of shredding guitars and electronic synths I have ever heard in my life. When I first found out the new album was filled with 17 songs I was in shock. I had been following Paramore through every step while they were working on their long awaited 4th album and I knew it was going to be flawless.

If you haven’t listened to the newest Paramore album I highly suggest you do. It is a true homage to the long journey Paramore has been on as a band, as friends, and as true people.

Now that I’m done gloating about the best band in the world, I’ll leave you with some pictures I took at the most recent Paramore show I went to in Virginia when they were on the “Paratour”.

The scene that appeared when the curtain finally dropped!

A beautiful shot of the confetti that shot out during the encore! 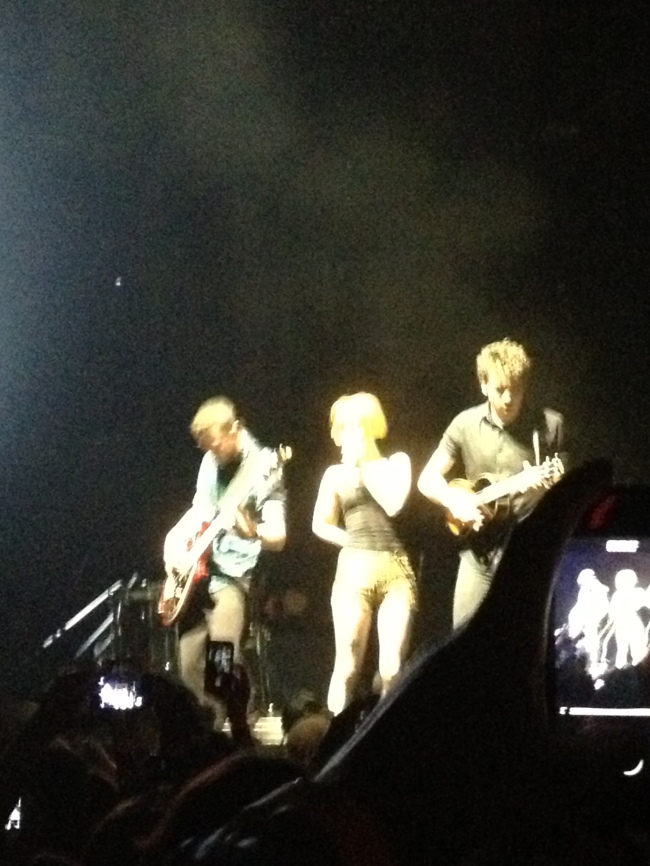 The trio jamming out to their “Interludes” 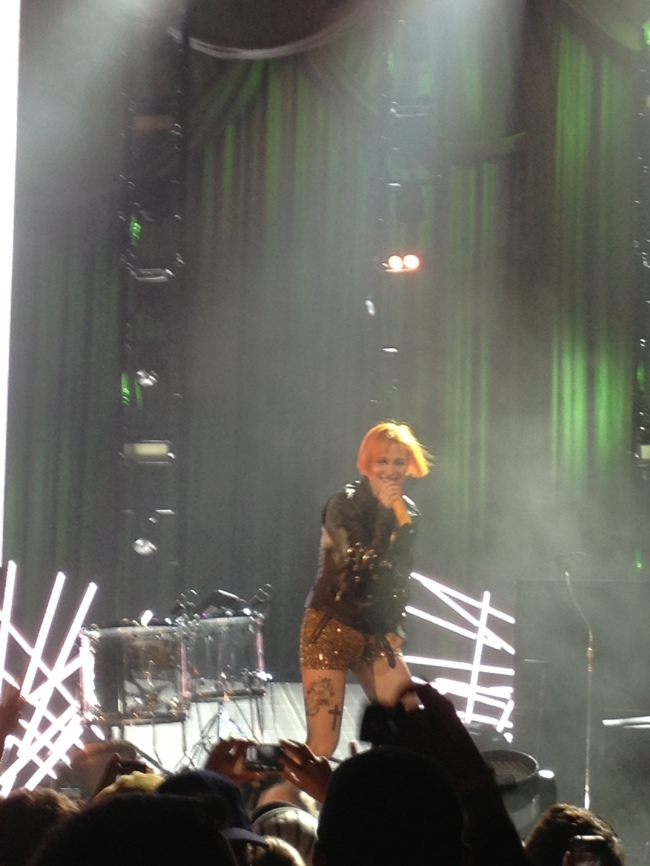 My name is Abbey and this is my first blog. I am currently a college student studying communications while specializing in music journalism! I hope to someday write for bands, magazines, blogs, or really anything as long as I get to live the musical life I have always dreamed of. Travelling and spreading the joy and emotion of music is something I aspire to do every day. I could not be more excited to start this new online journey and I look forward to gaining some followers in the process.

My mission for Blondie & the Beat is to give people a place to read about new music, old music, and just music in general. I will encompass the life of a college student who happens to have a passion for writing, reading, and spreading the love of music to everyone. I will post anything from music videos I love to why I think Beyoncé is a genius beyond words (yes, I’m still reeling from the “surprise” album.)

I hope everyone from every walk of life can look at my blog and find something they love about music.

So hop on the tour bus and lets do this thang!!!