Over the weekend I had the pleasure of seeing Ariana Grande LIVE and it was everything I hoped it would be and more! Not to mention the best early birthday present ever! My friends and I walked into the stadium through a flock of 10-13 year olds wearing their blinking Ariana cat ears (which were $40…no thanks…hello DIY). We grabbed a pretzel, tried to wait in the merch line…then decided to skip it and head to our seats. We were in the stands but had a perfect view of the stage in its entirety. The show start to finish is a massive production. Gorgeous lights, clear sound, fantastic choreography, and incredible visuals were everywhere during The Honeymoon World Tour. It’s easy to see that everyone on this team work day in and day out to make the show perfection every single time its done.

An almost 20-song setlist provided fans with the best Ariana playlist you could imagine, even playing her Major Lazer song from The Hunger Games, “All My Love”, her older unreleased track “Pink Champagne”, and a perfected cover/mashup of “I’m Every Woman/Vogue”. She talked to the crowd a couple times reminding everyone of how cute they are and expressed how thankful she is that everyone came to see her perform. There’s no doubt Ariana Grande will go down in history as a pop diva. 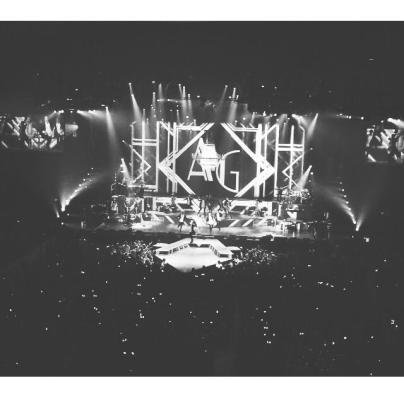 Most of the time she was strutting across the stage in her white sparkly Louboutin’s as her thick flowing hair bopped around to her every move. She kept up with the choreography while belting out every note even better than you hear it coming out of your car speakers. It’s almost as if she downplays her singing on her CD’s and then blows the roof off every venue when she performs them live. Grande makes every song sound effortless in the most angelic way. I was almost waiting for her to grow wings and fly back to the magical place she must’ve come from, because a voice like hers is truly one in a million.

Slower more sentimental songs like, “Honeymoon Avenue”, “Tattooed Heart”, and “My Everything” showcased her voice even more, and brought serious tears to my eyes. A sweet homage to her late grandfather brought the rest of the fans to tears as his voice was heard through the stadium giving Ariana words of encouragement for the rest of her life. Grande’s show start to finish was personal in the coolest ways.

Outfit changes, chandeliers, large clouds, sparks, confetti bombs-it’s safe to say Grande literally had it all. She was the epitome of a pop princess on a world tour. The bigger the better.